With excitement building as we approach our annual “best of” showcase, also known as the Piccadilly Comedy Club New Comedian Of The Year Final, we thought it was a good idea to look at one of the most intriguing acts in the show… Dan Audritt. A disciple of the “get to the punch-line asap” school of comedy, Audritt’s deft writing is matched by his skewed perspective on the world, especially when dealing with relationships. There are some brilliant jokes in there, often well disguised and told with a slightly boyish nievety.

Here is where his head is at…..

Where are you at this moment, and is it fun?

Well I’m answering this on Boxing Day, so I’m currently back at my parents sat in front of the TV drinking tea and eating more Chocolate than I should be. My parents have already mentioned that Stand up has made me fat so maybe I should swap the chocolate for the left over vegetables instead. Is it fun? I have no complaints.

What made you first want to perform comedy?

Performing came from desperately wanting to write comedy, but not knowing anyone who wanted the jokes I’d written. So when I started performing, my intention was to find someone who I found funny to write material for, but once I stood on stage and heard that laughter for myself I think I knew that I was going to carry on performing. I am the only person surprised i do this it seems, when i told my friends and family they all just asked why it had taken me so long.

What do you do outside of performing stand up comedy?

I’m very lucky that my day job is in the same field as Stand up comedy. I’m a Researcher/ Assistant Producer in comedy/entertainment TV. My other hobbies are filmmaking – so I’ve not put my eggs into many baskets.

‘My Name Is’ (Eminem) ‘Daniel’ (Elton John song). I am a ‘Comedian’ (Jerry Seinfeld film). ‘I Started a Joke’ (The Bee Gees) and the audiences give me an ‘Uncertain Smile’ (The The) and i often perform to the ‘Sound of Silence’ (Simon and Garfunkel) and then I go ‘Home Alone’ (Macaulay Culkin film.

Disclaimer – I’m not actually the biggest fan of some of those songs and films but it was the best I could do.

What are your favourite comedy clubs (remember who’s asking this)?

Piccadilly Comedy Club London is actually my favourite place to perform, but others I like playing are Amused Moose, Glee and I’ll always have a soft spot for the Cavendish Arms where I did my first gig.

The most embarrassing thing you have ever done while drunk is..?

I wish I could remember.

Describe your best and worst gigs?

My best gig was the final of the Golden Jesters in 2014. I’d been performing for about 7/8 months at the time and somehow found myself in the final with loads of friends. It was one of those gigs which just seemed to completely go my way and i ended up winning the competition. It was the first moment when I thought that I could consider doing comedy as more than a hobby. My worst gig was about 2 months before that in the Semi-final of So You Think You’re Funny. I died a death. We all did. I’d been to watch the semi-finals for the 2 days before and they were sold out and every act just had a brilliant set, but for some reason on my night the massive room was so empty and we each took it in turns to go up there and die. I was only about 5/6 months in at this point and had really put a lot of pressure on myself to get ready for this gig as I had heard how important it was. I’d died before and have died since, but that has been the only time when i came off stage and seriously questioned what I was doing. And whether I should continue.

Do you have any advice for anyone just starting to perform comedy?

I don’t think I’m in a position to be giving advice to be honest, but if it were to then I’d say ‘What ever you are trying to say, get there quicker. Get rid of anything that doesn’t need to be said, it just complicates things and leaves the audience sat waiting for the punchline’.

What would you cook us if you invited us to yours for dinner?

What have you got planned for the rest of the day?

I’ve got an idea for a new script I want to start writing, so I’ll probably sit down and work on that for a while.

A link to the original post can be seen here:

I've been voted DAVE's 4th best joke of the Fringe! 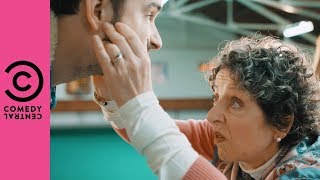 I couldn't resist making this video...